Ever since I saw a movie about a woman who committed herself to cook every single recipe of a Julia Child Cooking book within a year, this idea kept spinning around my head. Later on I heard about it being a hype: doing something for 365 days. Flow Magazine had an article about it. (That reminds me of finally subscribing to this marvellous magazine. Otherwise I'm missing out on all the fun...☺). Anyway, thanks to twitter it did cross my path, after all. And I came across Sanne Swinkels (@sanneswinkels and @365dagenproject) who got intrigued by the idea of  "Elke dag een draadje maakt een hemdsmouw in een jaar" (A thread a day makes the arm of a shirt in a year) who dedicated an entire website to the hype: 365dagenwebsite where she brings all ongoing projects together. Here you can present your own project, follow others and communicate about it. And having organized one thing or other myself, I know what an effort this is, how intense and how timeconsuming to set up. And I say: thumbs up for Sanne!
Having had a good look at her site I was surprised about the diversity of projects: Sanne herself is posting photographs of herself with a heart, another girl does everyday something creative with a clothespeg. A teacher from Utrecht sends out a tweet a day about something she enjoys. And many more. I especially like the organizing projects: clearing out a cupboard or a drawer a day. And after a year you've reorganized the whole house!

And of course the 365-day-project hype has reached the crafters as well. There was some talk on Twitter about a 365-project, involving crochet: #grannyaday making 1 granny square a day, which should result in a huge blanket after a year. Also very tempting: http://buildinghousesfromscraps.blogspot.com/ this is a quilting project from Jeanneke. She designed a beautiful small quilt pattern in the form of a house. Too beautiful to just make one. So she turned it into a 365-project for the year 2012. And what to think of the 365mouse project?

You've gatherd by now that I'm absolutely thrilled by the idea! And wouldn't this be the ideal way for an "all-at-once-person" to introduce more "graduality" into her life? The decision is made: I'm gonna join in!! And being a crafter, (with an impressive stash, I dare say) I'm prone to choose something involving needles ☺ But as much as I do love granny squares...I don't have that much stash in the same colour/thickness. And I'm NOT going to buy new yarn for this project. I opted for a crochetblanket: 1 row a day. And suddenly somebody suggested the Sky Scarf. Sky Scarf? I found it after some googleing... and I'm instantly smitten: what a cool idea is that! The pattern comes from lea at http://www.leafcutters.com/ and you can download the instructions there. 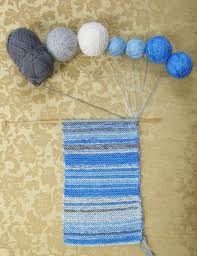 Here's what it is about: You start out collecting balls of yarn in a rather "thin" quality in colours the sky "could" have: +/- 7 colours like: white, gray, blue, lightblue, darkblue, etc. Then you start out by looking at the sky, at that very moment and then you take two strands of the colour that resembles the present colour of the sky most. Or you combine two colours that give the best result. Cast on a number of stitches in that colour, and knit one row. The following day you go again: find the matching colour, knit 2 rows, and that's it for that day. As you are going along you won't cut the threads, but lead the strands up, and wrap the yarn that you are supposed to knit with, around the others. This way, you don't have to take care of a zillion loose ends, when you are done ☺☺And after a year you'll have a unique scarf of about 1,50 m that tells you the story of the weather during the past 12 month.
I've still got some days to think about what pattern I'm going to knit. And how many stitches. "Ordinary" scarf or stola...? I'll keep you posted!! 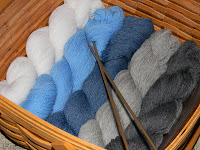